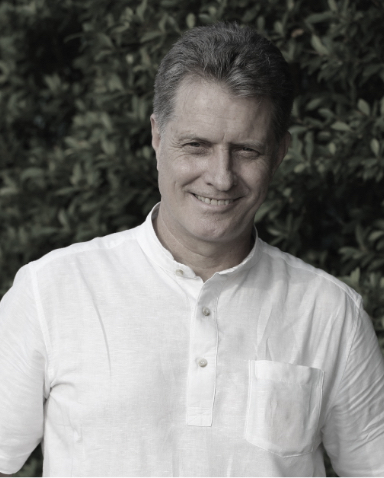 His early passion as a hotelier started during a summer job in 1972 at the luxury Park Avenue Hotel in Goteborg, Sweden. From this Grand Dame of hotels and because he witnessed the early expansion of chain hotels growing up in Africa and Asia – he became totally immersed in the industry as a 16-year-old. This journey took him to Switzerland and Hawaii to learn his trade, then joining the Westin Hotel Group in Norway in 1980.

As a result of his early connection through then professor Bob Burns (later Global Hotelier of the Year and founder CEO of Regent International Hotels) at the University of Hawaii, he then joined the Regent International Hotels company in Sydney, Australia. Christopher’s career from this point took him practicing the art of hospitality in nine countries. from managing the Bali Hai Moorea in Tahiti to Singapore, Malaysia, the Maldives, Thailand, Laos, Norway, the USA, and Sweden.

In the years following the Anantara establishment and global expansion, Christopher joined The Beaumont Partnership architectural practice as lead hospitality consultant in 2008. This involved him in the development planning of hotels in Morocco, Bangladesh, Thailand, and Cambodia.

In 2010 he linked up with famous hotelier William ‘Bill’ Black in Ativa Hotels & Resorts (subsequently renamed SilverNeedle Hospitality and Next Story). Here the focus was on creating new luxury boutique properties in Chiang Mai, Luang Prabang, and Bangkok. His brand instincts re-emerged with the creation of the 137 Pillars Hotel Group in 2015, where Christopher served as Chief Operating Officer until 2020.

Chris formed The Orient & Occident Company in 2021, which is part of the YAANA Ventures portfolio, and joined as an associate in YAANA Hospitality.

This website uses cookies to improve your experience while you navigate through the website. Out of these, the cookies that are categorized as necessary are stored on your browser as they are essential for the working of basic functionalities of the website. We also use third-party cookies that help us analyze and understand how you use this website. These cookies will be stored in your browser only with your consent. You also have the option to opt-out of these cookies. But opting out of some of these cookies may affect your browsing experience.
Necessary Always Enabled
Necessary cookies are absolutely essential for the website to function properly. These cookies ensure basic functionalities and security features of the website, anonymously.
Functional
Functional cookies help to perform certain functionalities like sharing the content of the website on social media platforms, collect feedbacks, and other third-party features.
Performance
Performance cookies are used to understand and analyze the key performance indexes of the website which helps in delivering a better user experience for the visitors.
Analytics
Analytical cookies are used to understand how visitors interact with the website. These cookies help provide information on metrics the number of visitors, bounce rate, traffic source, etc.
Advertisement
Advertisement cookies are used to provide visitors with relevant ads and marketing campaigns. These cookies track visitors across websites and collect information to provide customized ads.
Others
Other uncategorized cookies are those that are being analyzed and have not been classified into a category as yet.
SAVE & ACCEPT
Loading...
Loading...